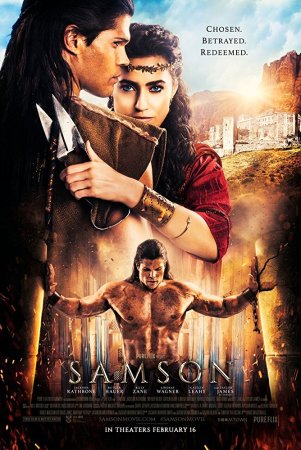 So what did you think of the movie Samson that was released about a month?  Unfortunately, I did not get to see it in time before it left the theaters.  It is so sad how fast a faith-based movie debuts and then is pulled from the big screen.  Guess I will have to catch it on Redbox.  I was really looking forward to it too because I have been doing a lot of study recently on the well-known Bible character.  In our Lifegroup we covered the life of this Samson who very well could be considered a superhero which from the previews of the movie, the film makers sure played up the superhuman strength.  In the book of Judges, Chapters 13 through 16 tells the story of what is known about Samson who has been featured in many a Sunday School Lesson and Children’s Book.  But let me ask you, what do you know about this epic Old Testament Hero?  For me, I thought I knew about Samson, but after studying these (4) short chapters I was shocked to see that there was much more to him.  Sure everyone knows about the supernatural strength, the long hair, and the overactive libido that led to the haircut, capture and death, but what else do you know?

As I studied, I learned that Samson was called for a very special purpose…to deliver the nation of Israel from the oppression of the Philistines, an enemy that they continually battled.  He was also a Judge over the Nation of Israel for (20) years.  Now if you are wondering what that means, Judges 2:18 (NLT) defines the role:

“Whenever the Lord raised up a judge over Israel, He was with that judge and rescued the people from their enemies throughout the judge’s lifetime.  For the Lord took pity on his people, who were burdened by oppression and suffering.”

In addition to that, as I read Judges 13:3-5 I found out that there was an angelic proclamation of Samson’s birth.  That was a surprise to me.  I did not recall that so I did some research and found that Samson was (1) of only (6) people to have an angel announce their birth.  The others were:

In Samson’s case, the Angel proclaimed to Manoah and his wife that their son was destined to be a Nazarite.  Now if you are not familiar with what that is…A Nazarite is defined in Numbers 6:1-21, in which a person vows for a certain length of time that they will:

The difference in Samson’s case was that this vow would be for a lifetime.  And so he made it onto another list.  In the Bible there are only (3) people mentioned that took the Nazarite vow for life:

Fun fact, the only one of these men actually called a “Nazarite” was Samson.  So why am I sharing all of this?  Because NO ONE IN ALL of the Bible had SO MUCH STACKED IN HIS FAVOR and yet when you read WHAT Samson did and WHY he did it, all I can say is WHAT WASTED POTENTIAL!  I asked the people in my Lifegroup to come up with some Life Lessons about the hero who is so widely taught about on Sunday mornings. Overwhelmingly, no one could come up with any positive actions that Samson did.  So here are some thoughts I had of what I have learned of “what not to do” from the Life of Samson.

Lessons from the Life of Samson:

“Then he came up and told his father and mother, “I saw one of the daughters of the Philistines at Timnah.  Now get her for me as my wife.””

And that refusal to submit to authority set the tone for how he would live his life!  Samson wanted what he wanted and chased after it regardless of the consequences.  His parents objected to the wedding but he forward with the planning anyway.  And the sad part, in the end he did not even get the woman because of Samson’s anger over the betrayal of her giving away the answer to his riddle.  See Judges 14:10-20 which leads us to our next life lesson…

As part of the engagement, Samson threw a week-long party leading up to the wedding. During the feasting, Samson lost a bet over a riddle and ended up killing (30) innocent Philistines to settle then wager.  He went back home to mommy and daddy and so his finance was given away in marriage to Samson’s best man.

When Samson found this out, he tied up (300) foxes and set their tails on fire and burned up all the grain fields of the Philistines. But that overreaction resulted his ex-fiancé and her father being burned alive and eventually severe consequences on the Nation of Israel.

“Beware lest you say in your heart, ‘My power and the might of my hand have gotten me this wealth.’ You shall remember the Lord your God, for it is he who gives you power to get wealth, that he may confirm his covenant that he swore to your fathers, as it is this day.”

He trusted on his own strength to solve all problems and thus took God for granted which is ironic because it was God who gave Samson the supernatural strength to do everything he did.

“Samson was now very thirsty, and he cried out to the Lord, ‘You have accomplished this great victory by the strength of your servant.  Must I now die of thirst and fall into the hands of these pagans?’”

His response was more like a spoiled brat than a great mighty man of valor.

We already discussed the Philistine woman at Timnah and the consequences that ensued.

When Samson was with the prostitute in Judges 16:1, it says in verse 2 that the Gazites:

“surrounded the place and set an ambush for him all night at the gate of the city.”

Then of course there is Delilah. Which leads us to the last life lesson…

“Delilah realized he had finally told her the truth, so she sent for the Philistine rulers. “Come back one more time,” she said, “for he has finally told me his secret.” So the Philistine rulers returned with the money in their hands. Delilah lulled Samson to sleep with his head in her lap, and then she called in a man to shave off the seven locks of his hair. In this way she began to bring him down, and his strength left him.”

I love that question…”Are you stable in your emotions?”  Samson clearly wasn’t as he played with fire sleeping with the enemy, fully knowing that Delilah was going to betray him and yet he gave away the secret to his strength!

“Then Samson called to the Lord and said, “O Lord God, please remember me and please strengthen me only this once, O God, that I may be avenged on the Philistines for my two eyes.” And Samson grasped the two middle pillars on which the house rested, and he leaned his weight against them, his right hand on the one and his left hand on the other. And Samson said, “Let me die with the Philistines.” Then he bowed with all his strength, and the house fell upon the lords and upon all the people who were in it. So the dead whom he killed at his death were more than those whom he had killed during his life.”

Now every Sunday School class heralds the epic death of Samson but look at the underlined words.  Samson did not say strengthen men to strike a heavy blow on the enemy of your people, he said strengthen that “I may be avenged on the Philistines for my two eyes.”  But nonetheless God used Samson’s “disobedience for the good of His people!”

As I complied this list, and saw how Samson threw away a great legacy to indulge his carnal desires and unleash revenge; the one word to that came to mind to describe Samson was not the typical Sunday School adjective like cunning, unique or strong…But rather UNSTABLE!  He was controlled by his flesh and as a result many people were hurt by his childish and selfish decisions.  That was the muse for this Thought, the reality that Samson was not strong at all, but weak!  Instead of walking with God, he followed his flesh!  I will close with this great summation of Samson’s life in a sentence…

OUCH!  That hurts but is also so true!  I want to leave you with this question to ruminate over…”

Come back soon for Part 2 that we will unpack how to be stable follower of Christ!

For further study, check out this blog post called:

If you are enjoying these posts, you can hit the “Follow” button to receive blogs delivered to your inbox so you never miss a post!